Listen to this article

Nobody doubts that bitcoin has revolutionized financial technology and, probably, the economy that we know. Blockchain technology has left us with a completely different way of resolving transactions without the mediation (or almost) of a central entity.  Moreover, this, for the payment systems and networks as we know today supported mainly on money held on bank deposits and move by transfers, debits or cards, is such a radical revolution as was on the 90s the email to postal communications. On the other hand, electronic money born in Europe with the 2004 Directive and now regulated by EU Countries national laws based on the 2009 Directive, let’s face it, has not found its place among these current payment schemes for accounts and cards. The characteristic of being a prepaid instrument has conditioned its general adoption. However, everything is changing and looks, it happens very fast. 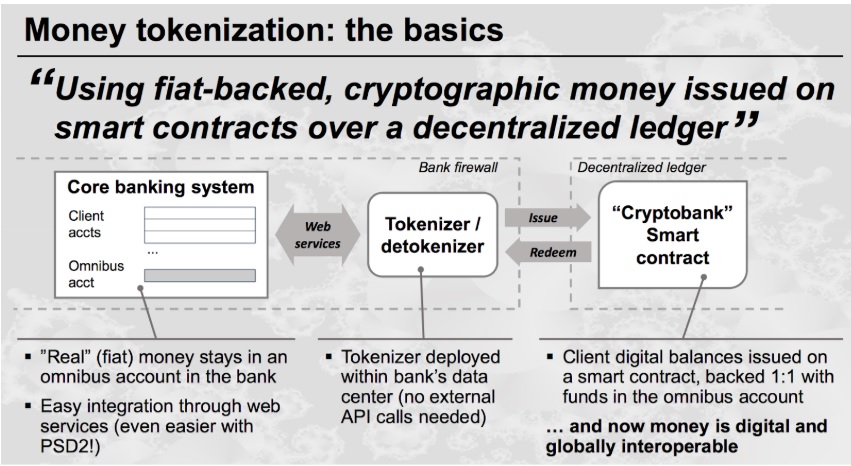 Blockchain enables a new digital space; someone calls it the internet of value or even the internet of money.  The distributed ledger becomes the only source of truth and is shared, making reconciliation, exchange or compensation of value unnecessary. Everything happens in the same «database,» everything happens instantly, under the control of all, in a private but shared transaction, without anyone being able to lie or falsify it. Everything is easier, more transparent, more efficient. That is why this disruptive technology has generated fascination and a genuine interest in the financial industry (and everybody interested in the blockchain for the real life).

The problem is that we have to represent the «value» in that singular ledger and to date, cryptocurrencies are the exchange value mechanism. However, what would happen if you could represent, «insert,» euros, dollars, pounds, «real» money (from the Central Bank in reality) in the blockchain? In our opinion, the answer is that we would have the «blood» for off-crypto economic transactions in the blockchain so «real» things would happen. Simply the exchange would be enabled, and the real transactions could be built on and developed throughout the Smart Contracts, that are called to change the economy that we know today making it more disintermediated and efficient.

Together with Momo-Sefide, in ioBuilders, we are building the regulated FIAT real money tokenized for blockchain. We’ve just said that electronic money has not adopted in fact and has not found its place among the current payment schemes. However, literally, its current regulation seems designed to support its existence in the blockchain. What’s more, there can’t be another FIAT based payment scheme more efficient than electronic money. In the first months of approaching the development of the solution, we can say that we are stunned by the amount and quality of the ideas and initiatives it boosts. The transforming power of the blockchain is simply radical, and this supposes a new use of electronic money. So much, so that we attempt to affirm (and in this, we are in fact investing) that as a payment scheme there is no alternative in present cryptoeconomics (at least as «native» and registered money).

We intend to be pioneers in offering to the Society «tokenized real money» and with it to lead this vision of the new use of the old electronic money in the blockchain environment. We are sure, and we believe that Momo-Sefide, as an operational support partner of ioBuilders, will become an indispensable and, for a specific time, very exclusive lever for the new models of value exchange that blockchian brings. That’s why we think that the electronic money that we know today, as probably the most consolidated current payment schemes have died (or will kill with the generalization of the use of new technology), but without any doubt is the key, the new king of a real world in the blockchain space.